Turkish Oriental  dance (aka Tansi Oryental) is an exotic, fiery whiz-bang style that is simply not getting enough attention these days. Let’s demystify it a little.

Turkish Oriental was the main ingredient in American belly dance in the 1960s through the 1980s, especially on the East Coast, and in many cases the styles are difficult to differentiate. This is true of both the dancing and the costuming.

Here are some words and phrases that are often used to describe Turkish Oriental, comparative to other bellydance styles. Watch for these qualities in the video clips that follow:

While Egyptian-style dancers are taking audiences on an emotional journey, Turkish dancers strive to blow their audiences away with fast and furious spins and shimmies, sharp isolations, and evocative floorwork. The energy and intention of the performer are completely different, even when the movement vocabulary overlaps.

The classic Turkish performance in the mid-20th century would include a strappy costume bra and slit skirt with fringed belt, entrance wrapped in a veil that matches the skirt, and continuous zilling. Turns, hops and level changes, lots of shimmies and locks. Here’s Tulay Karaka to demonstrate, in a 1979 performance.

Here’s another example of classic Turkish style, with a dramatic entrance, from Prenses Banu (Princess Banu).

If you’re an American of a certain age, you may be thinking that these Turkish dancers look exactly like the what we think of as the quintessential ‘bellydancer’ and even the music sounds a little… familiar. Blame Howard Hughes and other filmmakers from the 1950s. For instance, Turkish dancer Nejla Ates appeared in Son of Sinbad, King Richard and the Crusaders, and other films. (and yes, that’s Vincent Price watching her)

Turkish floorwork can sometimes be very sexual – and so can Turkish costumes! Here’s Princess Banu again, in a shocking but gorgeous costume:

In the late ’80’s to mid-’90s, Turkish costuming became skimpier and the music got edgier. Which makes sense if you think of it as happening side by side with the Solid Gold Dancers in the U.S. Here’s Pinar Elice, who some think of as more of a sex symbol than a dancer (like Pamela Anderson and acting)

This is Tanyeli, a major star from that period.


Although American dancers often still  associate skimpy costumes with Turkish dance, that period didn’t last very long. Here’s Tanyeli again, this time in the style of Turkish costume that was gaining popularity by the mid-90s — a heavily decorated skirt, no separate belt, ornately appliqued and trimmed with beads and rhinestones. Here you’ll see the classic Turkish head movements and floorwork and some more serious dancing.


Just for fun, I can’t resist sharing this brief clip of Asena with Paris Hilton!

Didem, a young Roman (Gypsy) dancer, took Asena’s robotic precision to a new level and combined it with flexibility and showmanship to create a unique style. Appearing regularly on the Ibo show has made Didem today’s most famous Turkish dancer. Her technique is impressive, but Egyptian-style dancers often find her dancing to lack emotion, especially when she’s performing to well-loved Arab classics.

Now fully grown, Didem has developed a more languid style. Her much-enhanced appearance is controversial among dancers but seems popular with the general public. She is the visible face of Turkish belly dance today and still a trendsetter.

There is still plenty of traditional Turkish-style dance going on, in spite of Didem’s influence. This dancer enters on a litter, evoking that early footage of Princess Banu, and wears a very traditional Turkish style costume, including the strappy bra, V-shaped belt, high-slit skirt, and high heels. She opens with veilwork and closes with a Turkish Romani (gypsy) style 9/8 rhythm.


Turkey has a long tradition of male dancers. One of Istanbul’s top dancers is Erhan Ay, a male dancer who is the headliner at the Hodjapasha Culture Center.

Other Notes About Turkish Oriental

Turkish style dancers often study some of the following styles:

Turkish style costuming from the 1960s to 1980s defined ‘bellydance’ in the US in that era. Bra and belt sets,  with long fringe and a full skirt slit high over both thighs is the classic Turkish look. V-shaped belts are considered uniquely Turkish. Veils were often wrapped over the costume in some way for entrances. Big fluffy hair, lots of bracelets or armbands stacked up the arm, and high heels completed the Turkish Oriental look.

The silhouette of today’s Turkish costuming is  simpler. Skirts may be a sleek velvet or lycra instead of fluffy chiffon, and the top of the skirt is usually decorated instead of wearing a separate belt. Dresses and one-piece costumes are also popular. But still the costumes are ornate, heavy with crystals, rhinestones, sequins, and beads, and more likely to be fringed than modern costumes from Egypt. Bella and Sim Moda Evi have been the biggest names in Turkish costume design for years, and both use a lot of cutouts and big rhinestones in their work.

Each related folkloric style has its own associated costume. The typical costume for Turkish Roman (gypsy) dancing is completely different from Oriental and involves many layers of fabric, a covered midsection, and not much sparkle or fringe.

Gigi Dilsah is currently dancing at Hodjapasha in Turkey but has lived in the US as well. If you’re headed to Istanbul, schedule a private class at her studio, or watch for her next round of workshops in the US.

Totally Turkish with Ruby is a solid DVD on the topic, with a choreography that includes Romani-style as well as Oriental moves. 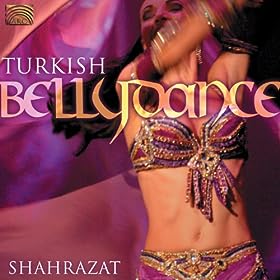 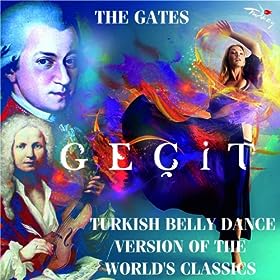 Geçit: The Gates is a strange collection of non-bellydance music, including Carmen and Eine Kleine Nachtmusik, re-imagined in a Turkish bellydance style. If you’re looking for something different, this might grab you.

Tips for locating your own bellydance music: How to Find Great Music for Belly Dance

copyright 2018 Lauren Zehara Haas for Belly Dance U. If you want to share this article, please do so by providing a link to this page. You’re more than welcome to print yourself a copy, but copying and distributing this article is prohibited.